Haply the seas and countries different
With variable objects shall expel
This something-settled matter in his heart,
Whereon his brains still beating puts him thus
From fashion of himself. (3.1.170-74)

Analyzed often from a psychoanalytical perspective, Hamlet's Danishness is rarely taken into account and many concur with the statement that location of the play is insignificant and the protagonist is ostensibly an English prince.

What happens when one starts to attend to the meaning and significance of the play's setting and the characters' nationality, however? Do we get a better understanding of what ails Hamlet? Is it the "dungeons" of Kronborg castle or the "rotten state" of his homeland, of which the ghost can be read as symbolic, or the drinking habits of his countrymen which "makes us traduced and taxed of other nations" that contribute to his "madness"? Surely we are missing something vital when we do not situate the drama within the geo-political context Shakespeare took good care that his audience should not forget?

This week we considered:

•The importance of setting and location to our understanding of Hamlet
•The play’s interest in issues relating to nationality
•The play’s representation of cross-cultural encounters / clashes
Hamlet is, after all, a political drama as much as it is a domestic tragedy. 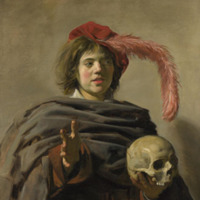